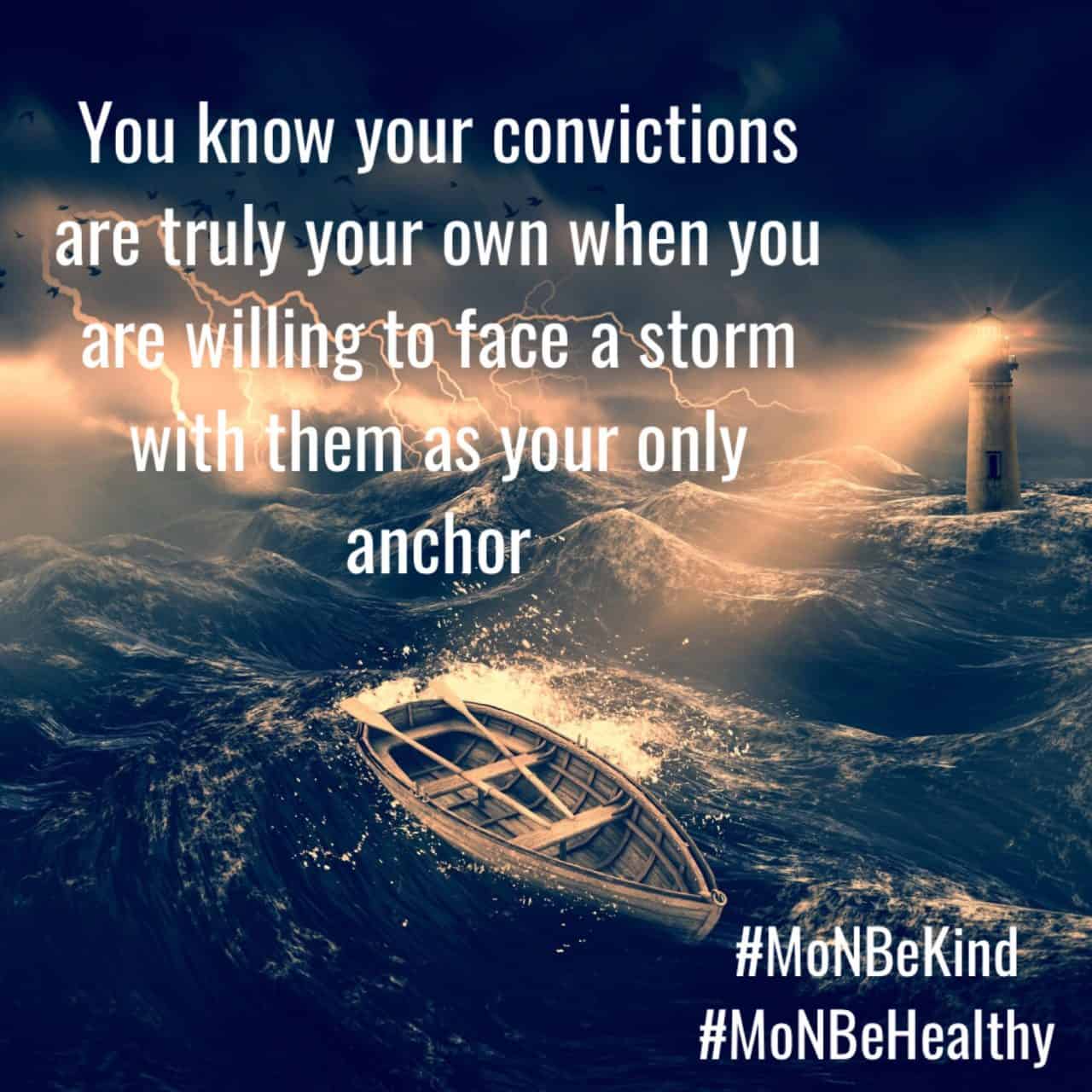 Conviction…..that word is one we’ve tried to instill in our kids from the day they were old enough to understand the need, to one day, navigate society on their own.

‘No matter what the crowd is doing, stick to your convictions, even if you’re doing so alone’

We’ve always taught them that, each person’s convictions will be tested, tried, stomped on by others, and questioned. We will have chances to compromise them. We may need to be reminded of their value. But we know if they are truly our own, when we were willing to face a  storm and use them as our only anchor. They are what defines us. They become the fabric we are made of.

As with everyone, some of my own convictions, came from childhood, others from lessons learned in life. Some have changed as I’ve grown up. Some have grown roots through great times and others have become part of my soul during my hardest and darkest moments. One of those fabric weaving moments came at the suicide of a close friend. I’ve always hated cruelty but her loss underlined my conviction that there is no room for the destruction of another human being, for any reason. And especially not because of the mentality that freedom of speech grants you the option to ‘say whatever you want.’

In this world of social media keyboard warriors, and instant world wide, online retribution for any perceived error or actual difference of opinion, one of my fast held convictions is that everyone should receive kindness. Political, religious, cultural, or any other differences aside. Kindness should be shown above all else. Even when the recipient is not necessarily ‘deserving’.

I have no use, time, or respect for those who quote scriptures or faux decency in public and spew hate behind closed doors. Running a Facebook group of local women of all opinions, this is not always a welcome conviction. But, I accept the blow back my stand causes without hesitation (or retaliation of shared screen shots or names of those we see behind the scenes with much different private personas than those shared openly.) That is something that is well known by our oldest daughter. At 17, I’m very open with her about the power of misused social media and the struggle to stick to what I hold dear in the face of some of the things our admin team sees.  No matter how angry or upset I become though, I’m easily able to weigh the impact of providing a soft place to land, in an otherwise hard world, against the momentary ire of those who would rather side with cruelty for entertainment. As far as I’m concerned, the women who tell stories of how badly they needed a kind word and knew they would receive it in our group, far outweigh the hateful words of those who choose a differing belief system. In her own navigation of social media pages and high school life, it is something that she is having to form her own convictions about. I have already seen her stand for those with a smaller voice than her own and I knew she was strong and brave and kind already. As a mom, of course, I have always hoped that our convictions will be shared by our children. That they will decide that kindness, even in the face of the opposite, is the road they will choose to travel.

Of course, in order to really choose a road, one must be given the opportunity not to. Although I believed that I had already mastered that choice, this week we were given the most difficult decision I have faced, yet.

This week, on the way home from one of our oldest daughter’s many activities, I watched her eyes light up as a phone call she had been waiting on came. She had spent weeks working on plans to incorporate a community service project, greater participation, and a way to create media attention for an event she has spent the better part of a year being a major part of. She had been speaking with people involved in the event, who all approved her plans – and had,in fact, encouraged them. She created a flier to share with her peers to generate interest in this event. She was so excited at the prospect of really making this something girls her age would want to be involved in. Unfortunately, the final voice is one she feared was going to stop her plans because of, quite frankly, personal- adult- issues with me. As the phone rang, she looked me in the eye, gave me a thumbs up, and answered the call on speaker.

‘Hello Taylor’ I heard the voice of one of the organizers begin. ‘Listen, I have a few things to tell you. First, the organizers like your flier and they are going to use it. But you can’t! ——— said you can’t post it or be carrying it around anywhere. She doesn’t want you sharing it on your social media either, but you can send your friends, who want to participate, to her privately. Also, she has declined your idea of a community service.’

My heart began to race as I watched my beautiful daughter’s face fall…. tears filled her eyes as she calmly and sweetly said ‘Ok Ms. ….. I understand.’ The voice on the other end of the phone paused slightly, ‘Ya, I uhhhh don’t know what else to say. They still want you to work over there next week.’

At that point my Mama Bear woke up with a vengeance. Use her flier, but give her no credit? Deny a community service?  I pulled over and parked as I mouthed words that I probably should not have said. My heart swelled with pride and shattered at the same time as I watched my baby girl, continue to handle herself with professionalism worthy of , but rarely shared by those, 3 times her age. Certainly, obviously not shared by those in question here…..

‘Ms. …..’ I watched her square her shoulders, ‘I still would like to help at the event, but I probably won’t get asked to. I’ve already been left out, this year, by ———- because of a personal issue with my mom.’

‘I know Taylor, I know. I’m sorry….’ the voice on the other end said….. the rest of the conversation doesn’t matter. It was really just fluff anyway. Although I feel like that voice wanted things to be different, she either couldn’t or wouldn’t stand up for the child she had encouraged to present these ideas….to do this work….to be left standing alone.

And so, you see, in that moment my convictions were rapidly becoming compromised in my desire to destroy the facade of those who had  just intentionally so deeply hurt my daughter. I told her I would damn every torpedo I may face. I swore I would use every ounce of my social media presence to expose the truth of what had just been and what had been being done since she earned her place in this event. I was filled with every ounce of anger, and pain for my child, that a mom can feel. I was, at that moment, prepared to write this blog, with names in bold. I was ready to wage war. I was willing to allow their cruelty to create my own.

So, then, why am I telling you this story so vaguely instead?

As I spoke to our incredible daughter, she asked me not to. She chose the road of kindness. She reminded me of my own. She faced the storm and stayed anchored.

The next morning, with her daddy, over breakfast, we discussed the decision to just keep going, to fulfill her commitments to this event and yes, even to ————. As I looked at her. She shrugged.

‘It’s ok, momma’ she said, ‘they can’t stop me from my plans completely! I’ll find someplace else to do them.’

Waves are going to crash over you at some point in life. Your convictions will be tested. Will be stomped on. Will be questioned. Sometimes, maybe most importantly, you will question them yourself.

I hope when you face those waves, you’re as blessed as I was to be reminded what you’re anchored to. I am honestly still struggling with my desire to blast each detail of this story to anyone who would listen. I am battling my desire to demand a public answer to why or how someone would be so intentionally cruel to a child. There is still part of me that is struggling with the full desire to wage war…. But I am also sure of my conviction. I will show kindness even when it’s not deserved. It is what I want to be defined by, what I hope people will say I am made of. I’m so proud that it’s what our queen of a daughter has chosen to be defined by as well! 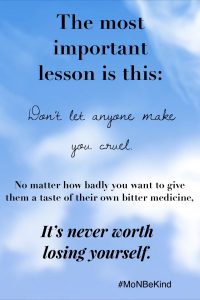