The Blessings of Cancer!? 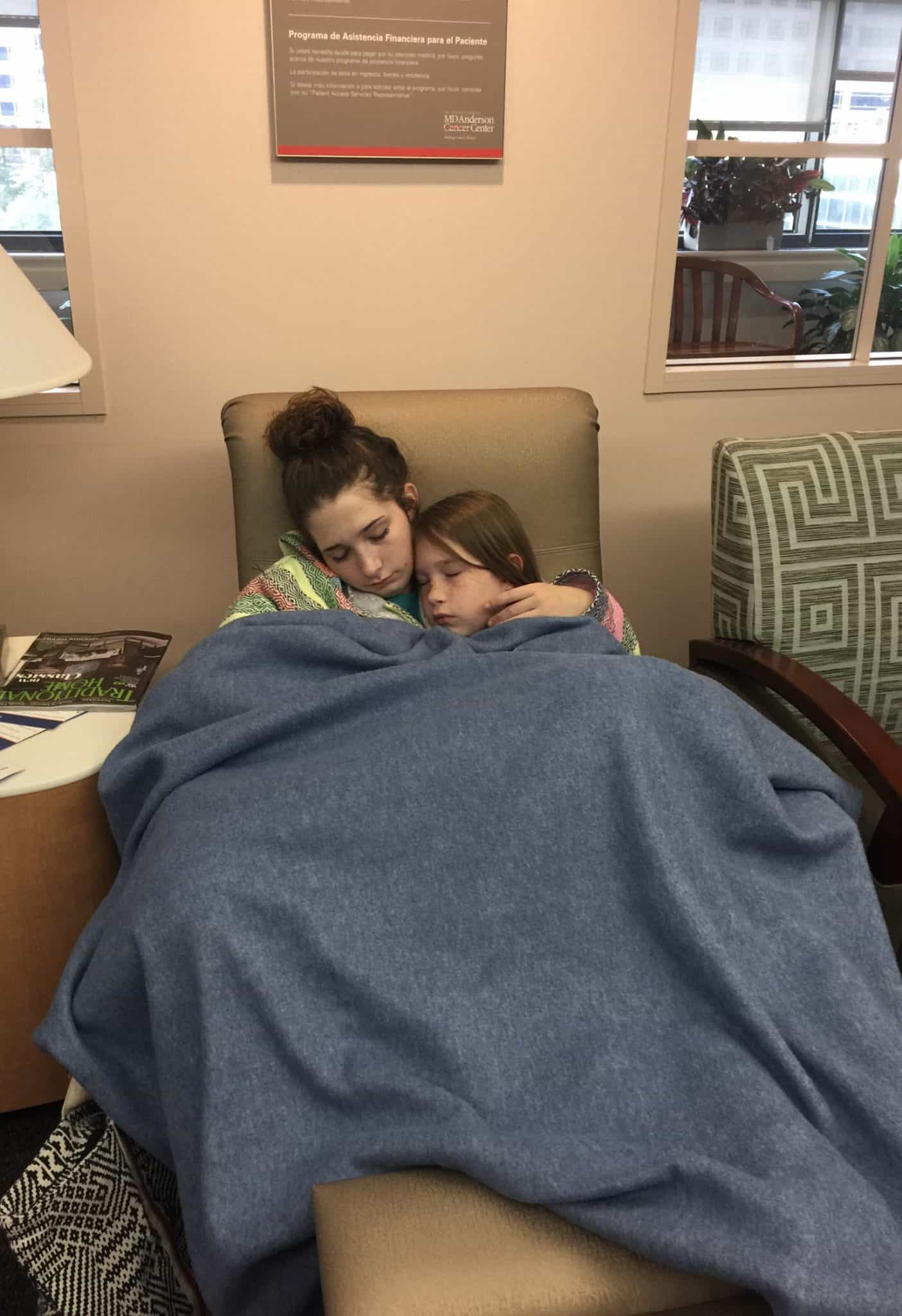 The blessings of Cancer….

In order to get where we are, we will have to take a minute to rewind back to where we have been. I had been fighting anemia so severe that I had just had my 5th 5 unit blood transfusion, a chest port placed to handle all the iron they were having to pump into me 2x a week, and had begged, again, for my dermatologist to look at a spot on my head that I knew was a problem. In literal despair and desperation, after a doctor told us that I would not be here for 5 more transfusions if something didn’t drastically change, I gave up our hopes for ‘one more baby’ and went to talk to my OB about a hysterectomy. Nobody was sure this would help at all. But because my blood was going somewhere we couldn’t find, we had to stop the obvious places where blood gets lost to. My OB of the last 20 years, did not want to put me in surgery. It was ‘too risky’. So I was  transferred to an OB willing to use a robotic procedure,in a hospital with much greater ability to handle a ‘crisis’, should one arise. 3 days before my 19th wedding anniversary, at 5am, I cried our way into the ‘city hospital’, and what I was sure was the worst possible thing that could happen. A hysterectomy. I woke up from that surgery to the anesthesiologist standing at my bedside. He took my hand, asked me to look at him in the eye and told me to have that spot on my head looked at…..I told him I had. I already knew something was wrong. He told me to  try again. Demand someone listen! And so, 6 weeks later, on the first day I was allowed to drive after surgery, I heard the words that I knew were coming all along. Cancer.

‘No doubt’ that same dermatologist I had been to so many times in my life, said, ‘I bet you’re pretty angry at me…’ I’ll spare you the words I used, and the details of the rest of an equally horrific appointment. I left his office with a hole in my head and a knot in my stomach. I remember biting the inside of my cheek as I looked at our girls and dismissed their fears with a smile. It’s just skin cancer, I had said. Absolutely no big deal! He’s sure he got it all. I still choke up at the memory of the sound of my husband’s voice when I told him what the doctor had said. The expected 7 days until the biopsy came back turned out to be a very short 48 hours and another very short 48 hours after that I was 3 hours away from home, receiving a welcome packet from the largest Cancer hospital in the US.

‘You become a survivor the day you’re diagnosed’ the folder on my lap proclaimed.

A survivor? I made a joke about the old Destiny’s Child song. I wasn’t going to need to be a ‘survivor’…..this wasn’t ‘real Cancer’ it was just cancer with a lowercase c. It turns out I was wrong. In reality there is no lowercase ‘c’ Cancer. It’s all scary and mean and big.

We joke now that those first few months were such a blur that we didn’t know if we were coming or going and it’s probably the best thing in the world that we didn’t. My capital C required surgery to get ready for surgery. Scans and exams revealed more issues and concerns that had to be addressed. 2 major surgeries just to get ready for what would turn out to be a 9 hour- 9 inch scar creating ‘reconstruction’ of my head. And yet, in the moments between impacts, in the rides to and from the appointments to prepare for the next battle, we had more fun than I can ever remember before. We stayed in hotels that had Chinese food delivery. (A big deal for my small town family). We treated it, and still do, like we were taking vacations. We made up games, sang songs, ate more snacks, laid in bed together more, and learned so many things that we were sure we already knew about each other. It turns out there are so many things you didn’t know, you didn’t know!

They say that hard times will show you who your ‘true friends’ are.  Well, that’s been true. We’ve been hugged on and prayed for and loved in ways we could have never imagined….But in the last 3 years, the blessing of Cancer, has been that it has shown me who my family really is and just what we are capable of.

I’ve learned that our kids, outside of being amazing simply in the way a parent loves their own- are really and truly INCREDIBLE people. I’ve watched our daughters share a recliner and hold each other while they slept in more waiting rooms than can easily be counted. I have stood back as they’ve started their own Kindness Campaign, May You Have a ROSEY day,  to ease the fear and sorrow, that comes along with those waiting rooms. I’ve seen them light up with smiles that I knew their hearts were having a hard time feeling as I walked out of another appointment and never complain about hunger or lack of sleep or discomfort or missing an event or party back at home. I’ve watched them create hashtags to lighten the mood and I’ve seen more compassion and strength and wisdom in them than in some people I’ve known who are 3x their ages.

I’ve learned that my husband of 22 years, didn’t just love me with long red hair and no scars. I’ve seen his eyes deep with worry, light up as I’ve opened mine, surgery after surgery, with the same words on his lips- ‘Everything went ok babe! We’ve got this licked!’ I watched those same eyes fill with tears as he’s held me and sworn it was all going to be ok, when the need for yet another surgery becomes apparent. I’ve learned I’m more valuable to him than his dream of cattle or land or tractors or trucks. I’ve fallen in love with him a million times over as I’ve seen him carry the weight of all our family’s needs on his shoulders and yet never fail to hold me up or cheer me on when I stumble. I have learned to watch his face soften at the sight of another family taking their own steps down this road because I’m reminded every time I see it, that Cancer hasn’t stolen his kindness either. I’ve learned that he meant every single letter of ‘in sickness and in health’ in a way that you only know, if that line gets put to the test. I’ve learned that he also meant ‘For richer or poorer’ because this will test that line too.

The blessing of Cancer has been that I’ve learned that when you open your eyes and your heart in the right direction, there are blessings and beauty available even in the darkest and lowest valleys. In the last 3+ years, I’ve seen those blessings in abundance. Hard times change you, they teach you lessons that you may not want to learn. Sometimes they take more than we are willing to easily give  but it’s really the perspective you choose, that decides if they harden you.

I know that we never would have chosen this road but I wouldn’t give back a single one of the blessings this road has given me if I had to lose them to travel an easier one.

We still have to take those car rides, we still sing songs, stop at Bucee’s for ice coffee and snacks, we still order Chinese food, and eat it camped around the end table in our hotel rooms. Sometimes the familiarity of the largest Cancer center in the nation takes my breath away. The reality of the fact that driving there is now as easy as driving to my local HEB, is sometimes a shocking realization. But then I look into the eyes of the 3 who’ve taken every step of this journey with me and I know that we’ve got plenty more blessings left to see unfold.

3 years ago, I would have told you that nothing blessed could co-exist with this terrible illness. But that was 3 years ago….Now I know different. Maybe the biggest blessing of Cancer has been learning that somehow, even Cancer cant stop the blessings life contains. Mountain top or valley floor- they are everywhere. Just open your heart and your eyes in the right direction and you’ll find them in abundance.

3 years ago I would have read this article and thought the person writing it must be nuts….but that was 3 years ago, and 3 years ago I just hadn’t been blessed yet!

If you’re facing something that feels too big to possibly contain a single blessing, please feel free to comment or contact me privately. I am happy to encourage you, pray for you, send you positive thoughts, or just listen.  💖